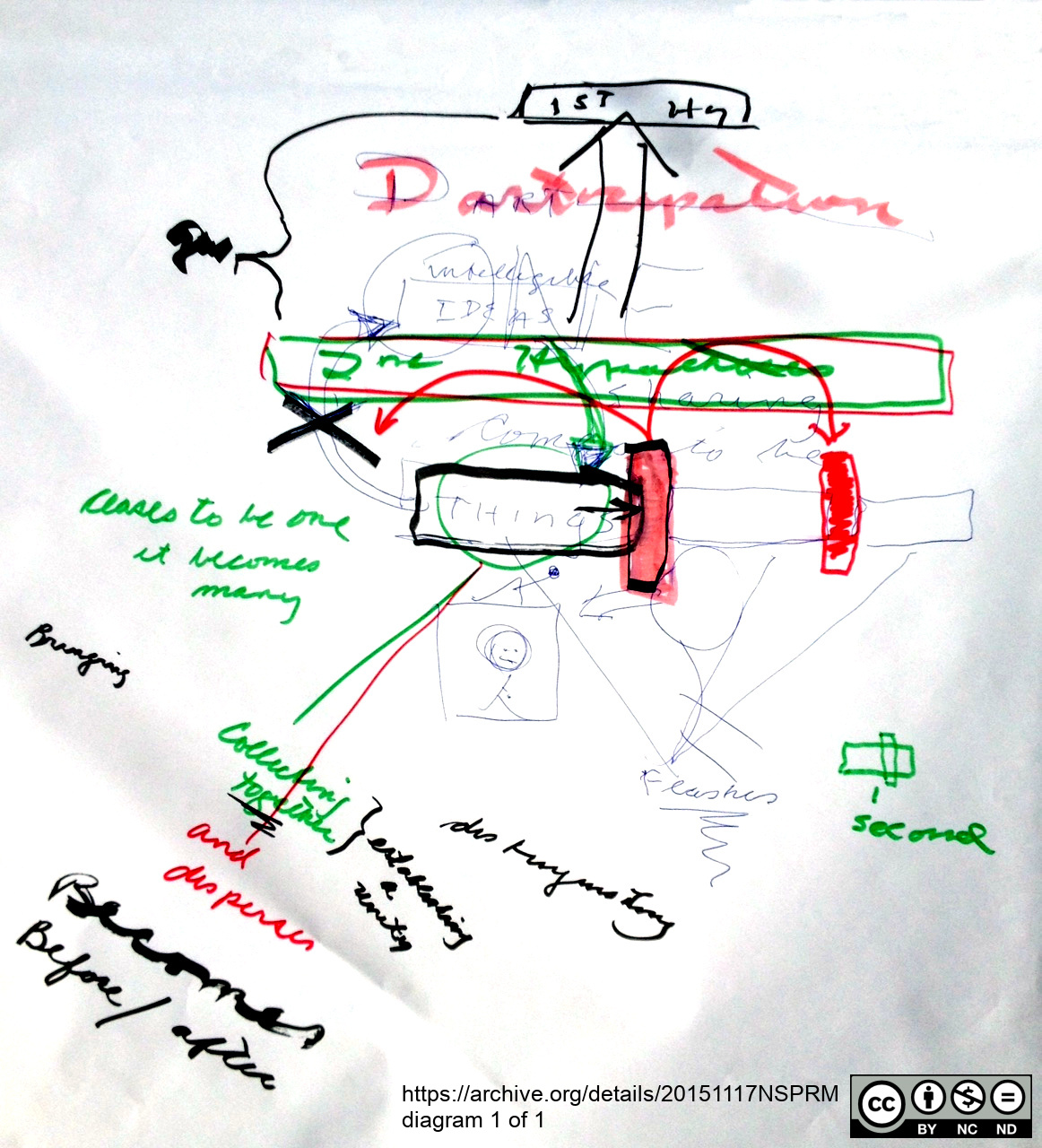 00:00 Discussion (PG & Bradley) of what it is about the Zen people that causes them to avoid at all costs, the Logos. And a subset of those who break off from the main branch, because of this.

12:05 DC's question about the One's participation in Time (the 3rd)

14:21 The heart of Zen Buddhism is in the 3rd hypothesis

But the third is a continuation of the 2nd

Behind-door conversations at the Zendo

17:48 The big problem in the 3rd is the Self. Right from the beginning

22:30 (Pierre starting a diagram): The idea of participation: re are Ideas, and the source of the many things is because there is a participation into things of Ideas, and return. Yes or no?

PG: This is false. This is the whole issue of the Parmenides.

23:56 Can you think of any situation where this occurs, and in principle, there is no return? (This = “participation”?)

Pierre's example of looking in a mirror: There is a participation. But it is one-way.
There is no participation in any reflected substance.

“And if this is, there isn't any, and that's all.” (e was obviously pointing at the board here, and I didn't call out what he was pointing to.) “That's the third hypothesis.” DC: So there is no idea of things (by “things” we mean stuff in the phenomenological / physical world).

And further there is no connection between things. These are momentary flashes, just like images in the Cave.

It's only through Time that the paradigm becomes the physical world of appearances.

Participating at one time, but not at another. Time.

“He's calling THIS sharing” (I don't know what he is referring to in his diagram, and he's still drawing in the faint pen).

48:15 156b dispersed/collected, like/unlike, etc: He is building up a list of mysteries, but has not explained them yet. If it were true, it would be dynamic, but it is not. He is building the case for 'the Moment', where all of these can take place.

54:40 No time when anything is neither moving nor standing still

No continuity. Gap. In that and out of that all change, rest and motion proceeds.

Jeff: Can the gap be proven not just with reason, but empirically?

PG: Quantum physics is working on it, dividing the second smaller and smaller. The limit being the Gap. And the closer they get to it, the more intelligible and vital and super-symmetric things appear.

1:05:00 The act of observing children playing make-believe stops the game

1:07:05 PG: There is a massive intelligibility in just the momentary fragment of it

DC: When the one enters into time, it brings with it the stuff of the 2nd hyp

Working with Barbara on the mirror analogy

1:15:23 PG The nature of reality therefore is nothing other than instantaneous flashes, within which there is the gap

What you are calling physical reality is the sum of all of the instantaneous flashes.

Jeff: what is the ratio of the image/things to gap, time-wise?

PG: Gap has no time

1:19:40 PG: Do you notice that no motion picture has ever pictured Time? Since all it has is static images? And the action of Time-as-motion must take place in the gap - the black spot between the frames.

1:24:15 Like the theory of limits (in calculus), and PG's math professor at St Johns

1:25:20 The gaps and the frames between them have no magnitude

1:27:00 Barb: I was interested in your (Jeff's) question about how we could perceive it (the frames) because that which perceives is part-and-parcel of the perceived: They're all the same “stuff”..

1:27:30 Implications, neuro-physiologically, vs perception. Mind. If Mind is involved, then we are sharing in the gap.

DC: Platonism: Why not just get into the gap, purely?

PG: The 3rd presupposes the 2nd. The 2nd the 1st. But there is another kind of “gap” between each of those.

1:31:30 Jeff's question (at Parm 10, 156b) if there would be a better translation of the assimilated / dissimilated word? Barb: Likened/unlikened, but I would need to look at it more.

1:34:00 PG: If it is just a say split, momentary moment that is being projected upon, that's a whole universe! That's a/our whole galaxy, what's going on! Everything! BTW, must not the next micro-second coming along, fit with what just took place?

So it must fit precisely, from gap to gap, everywhere, with astonishing co-herence. It must establish a unity with what just passed. And that means it must collect together something that absolutely fits with the most astonishing precision, throughout the entire universe!

This is where philosophy comes in. Where is the order that is going on? It presupposes an astonishing degree of order! Is there anything meaningful going on? Is there a place for providence? If so, it must be on a most astonishing level, throughout the entire universe, through all time! That's the 3rd hypothesis.

This is why likeness and unlikeness is collecting together. It has to be Like. There has to be a likeness. And it has to have a unity.

1:36:50 JeffS: What does the assimilated/dissimmilated add?

PG: Well, there has to be a likeness and an unlikeness.

JS: Yes, but then why does he add that additional point.

DC: For there to be qualities, there must be verbs that bring about those qualities.

PG: “Time is a moving image of eternity.” (quote?)

1:41:10 JeffS: Could we grow spiritually without Time?

PG: Same question. What is time? Or can we only grow when we get out of time and into the gap?

1:41:28 PG: What would it be like if they introduced the 3rd hypothesis to high school? At what age could this be brought in? As soon as they're thinking!


Working from Plato's Parmenides: The Juan and Maria Balboa Translation

Uploaded by Unknown on September 3, 2017